Road impacts of animals have had a clear increase in Nova Scotia and right now there is very little infrastructure to ease the transportation of animals through the Nova Scotia road network and many single lane roads that are unsafe when trying to avoid hitting animals. Impacts with animals could not only lead to the death of an animal, but could cause major property damage, or in some cases, cause an accident that leads to more serious injuries of passengers in the vehicle.

The current method of reporting roadkill is a 1-(800) number that connects the reporter with the Department of Natural Resources, the Department of Transportation, the RCMP, or limited voluntary wildlife rescue organizations (there are currently only two notable in Nova Scotia). This method may be considered more tedious than a user-friendly survey application to facilitate the simplicity of reporting with an easy-to-use interface. With this strategic method, it will be easier to keep track of the observation data by importing it directly into a geodatabase that gives a tangible and accurate georeference and other pertinent information that is associated with the event.

By engaging the public in reporting roadkill, live data and valuable spatial information can be provided to conservation authorities, government agencies, and municipalities to evaluate areas that are more susceptible to road impacts with animals. Observations being directly available in a geodatabase allow these organizations to query the data in order to gain more spatial information on a specific species. 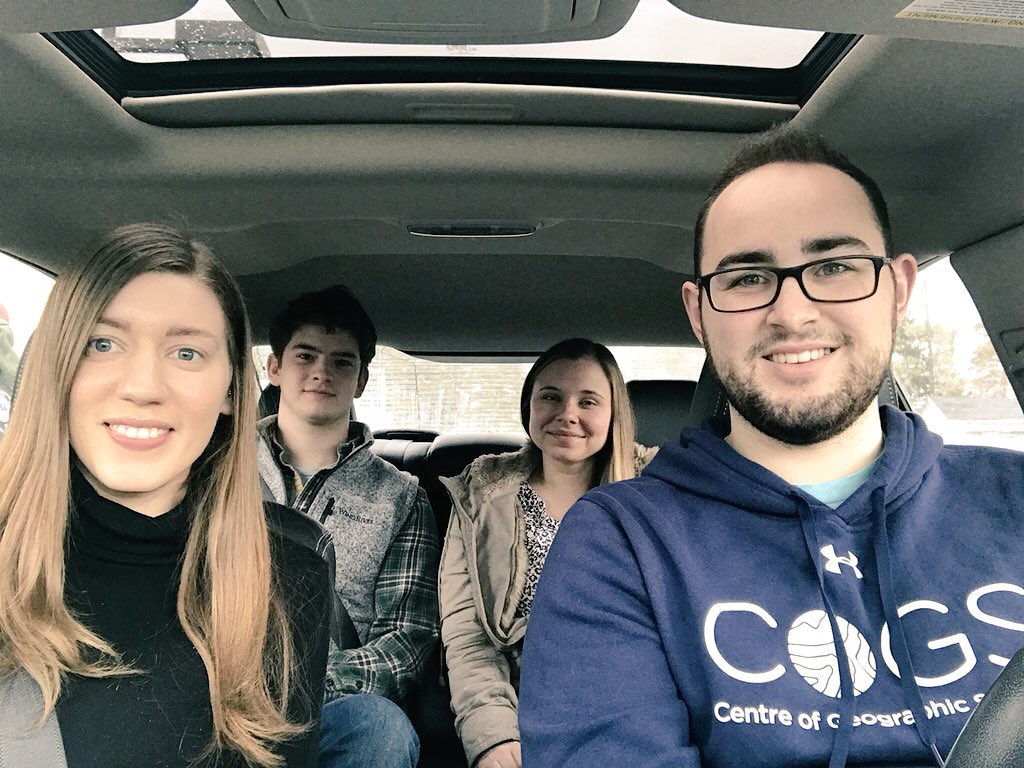 Erica Corbett: (left) Erica is a Memorial University Alumni where she studied Geography as a Science. She also volunteered with Mount Pearl Sr. High School where she worked as an assistant world geography teacher. She then moved on to teach ESL in South Korea for three years, and is now back in Eastern Canada in the process of completing her Advanced GIS diploma at COGS. She is also completing a research project in collaboration with Dalhousie University’s Food Policy Lab doing a spatio-temporal analysis of Nova Scotia’s food environment. Erica’s future goals are to be able to combine her love of teaching and GIS in a rewarding career.

Colin Werle: (middle-left) Colin is a Saint Mary’s University Graduate with a Geography Major and Economics Minor. He has recently traveled to Arctic Norway where he studied on exchange for five months at the University of Tromso. Following his graduation at Saint Mary’s, he completed a co-op work-term at the Canada Centre for Remote Sensing in Ottawa, Ontario in the summer of 2017. He now goes to COGS studying Advanced GIS and is part of the school hockey team and a member of the ECCE. His future goals are to enter the GIS market in Europe, travel to more countries and learn new languages.

Andrea Becker: (middle-right) Andrea is a University of Waterloo Alumni where she studied Geography and Environmental Management. She did an exchange in England studying Geography at the University of Sheffield. She now attends COGS studying Advanced GIS where she is part of the ECCE program and is working on a term-long project developing an application to monitor food environments for the Food Policy Lab at Dalhousie University. Her future goals are to have a career combining her passion of Geography and programming in the field of GIS.

Harrison Smith: (right) Harry graduated from St Mary’s University with a Geography Major in 2017 where he completed a field course studying Environmental and Anthropogenic Issues of the Bay of Fundy. He was a research assistant at Saint Mary’s collecting data pertaining to inventory on Halifax retail stores. He now goes to COGS taking Advanced GIS and is part of the school hockey team. His future goals are to work with mobile applications in the GIS industry collecting real-time data.