With 55% of the world’s population residing in urban areas and a projected increase to 68% by 2050,cities worldwide are undergoing a surge of rapid urbanization creating new urban challenges and stressors. Cities are looking to better manage affordable housing and adequate infrastructure to sustain growing populations, while taking on considerations on the long-term environmental and health effects of urban sprawl. Similarly, being the tenth largest Census Metropolitan Area (CMA) in Canada, the region of Kitchener-Waterloo, ON, is estimated to increase its population to 729,000 by 2031.

In anticipation of these changes, the region have been actively incorporating the United Nations’ Sustainable Development Goal 11 as part of their sustainable city initiative, releasing the Active Transportation Master Plan and Moving Forward 2031 Regional Transportation Master Plan. Along with intensive public consultation, current strategies outline a shift in increasing connectivity and urban compactness, changing the way people move throughout and beyond the Waterloo Region, building on the recent successes in increasing transit ridership, while supporting new cycling and pedestrian infrastructure. Our application, CityJaunt, strives to aide the Region, decision-makers, and its citizens in achieving for a highly connected, sustainable future.

Our app aims to promote the use of active transportation, to use personal vehicles less for shorter trips, making use of other modes of transportation with a lower carbon footprint, such as public transport, cycling and walking. The Region is surprisingly well connected by a range of transportation options including bus routes, bike lanes, pedestrian walkways and the upcoming light rail transit (LRT) systems. Based on past studies and our analysis, the region is equipped with high levels of walkability, meaning many places can be travelled to solely by foot.

With growing concerns on public health, the Canadian government have been partnering with private institutions, NGOs and cities to better the well-being of Canadians. The World Health Organization (WHO) has found that less than 60% of the world’s population fail to achieve the minimum target for physical activity moderately for 30 minutes a day. Studies and the recent success of health promotion apps prove that active transportation can be an easy and effective solution. CityJaunt encourages users to walk to compliment their healthy living guides as they plan their day-to-day trips around the Region.

Every city is unique, dotted with local culture and heritage that make up the urban form. Aligning with the UN’s Sustainable Development Goal 11.4 and 11.7, the Region has a range green spaces, historical sites, recreational outlets and landmarks that are under-utilized and unexplored. Our goal is to introduce these spaces to the typical Waterluvian, incorporating them into their daily plans and travel routes to increase awareness and local heritage, and raise neighbourhood satisfaction and well-being. 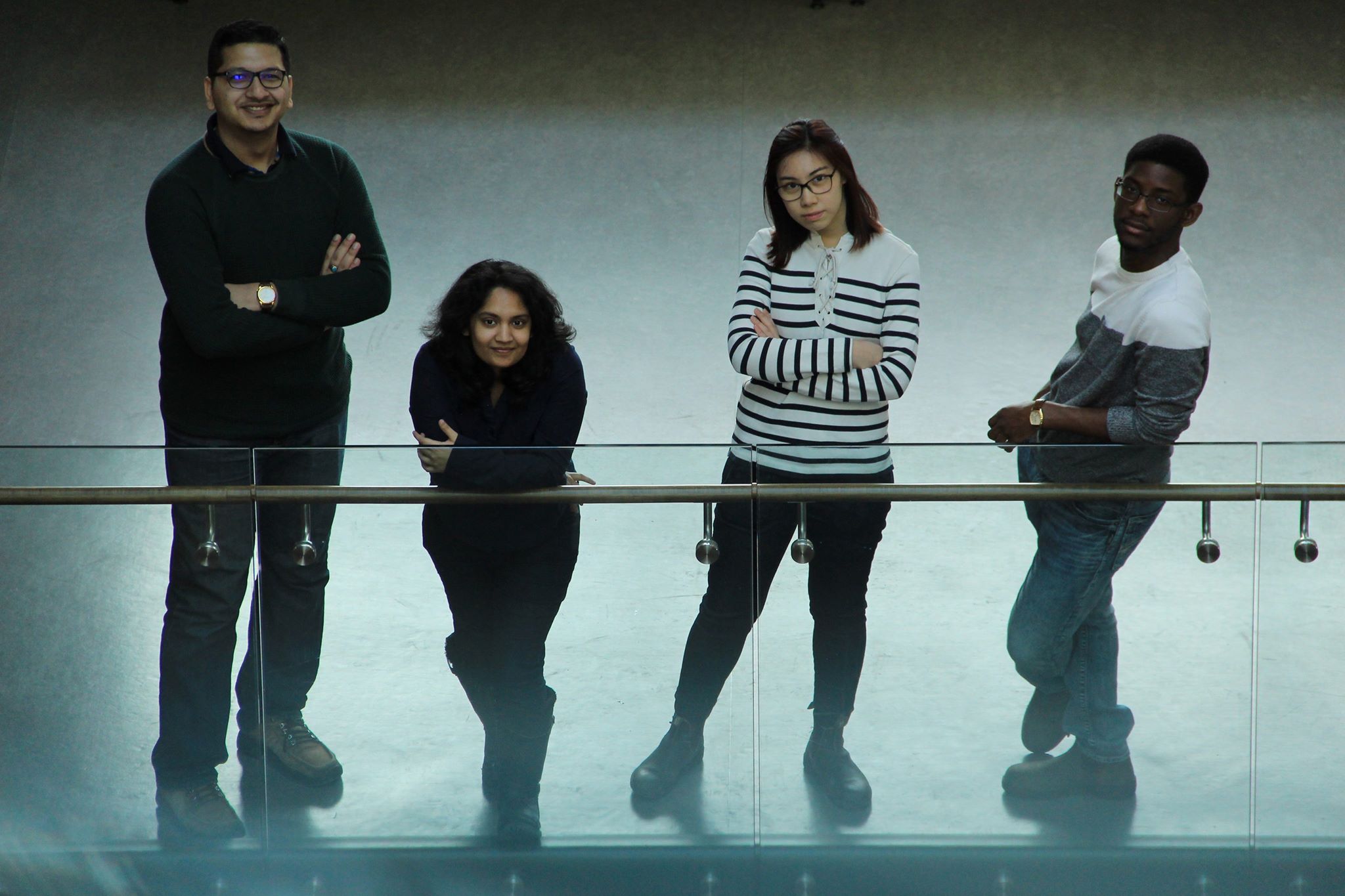 Aujas Bandlish: Developer - Aujas (left) is in his final year of Geomatics at the University of Waterloo. Through the coop program, he gained a variety of experiences, working for Federal government (Statistics Canada), Municipal government (York Region and Region of Waterloo), and private sector (BlueDot Global and Zayo Canada). These experiences have helped him in honing his GIS, data management and coding skills. In addition to that, he has taken part in the first National Geomatics Competition in New Brunswick and ranked second. These, coupled with personal projects and his academic career, have given him an opportunity to learn and experience the depths of GIS.

Candy Lee: Website and UX Designer - Candy (centre-right) is a Geography and Environmental Management undergraduate, with a specialization in Geomatics at the University of Waterloo. Her interests lies with sustainable transportation and infrastructure planning with the use of spatial analysis tools such as Geographic Information Systems (GIS) and Remote Sensing. Equipped with the knowledge and experience from the technical, physical, and human side of geography, she hopes to enrich society's quality of life through the balanced aspirations of the public and private institutions. When Candy doesn't have her head wrapped around transportation and geomatics, she enjoys urban exploration, street photography, taking on challenges and suffers from chronic multi-tabs syndrome.

Netzach Straker: Developer - Netzach (right) is an Undergraduate student at the University of Waterloo studying Geomatics with a Computer Science minor. His passion lies with understanding the repercussions of land cover change by utilizing Geographic Information Systems and Remote Sensing. His purpose is to continue to advance the knowledge and experience so as to become proficient in his craft. During his free time Netzach enjoys reading, eating delicious foods, warm weather, and interacting with others through witty banter.

Yuvna Apajee: Data finder and Documentation - Yuvna (centre-left) is a third-year Honours Geomatics student at the University of Waterloo. She is also completing a minor in Urban Studies, with a focus in Urban Activity and the Environment. For her Coop, Yuvna worked for the City of Toronto, as a GIS analyst in the Transportation Division, dealing with the management and programming of Infrastructure and other Assets. Her free time is devoted to the Fifth generation of Transportation, which is being referred as, Hyperloop. She is part of the Infrastructure team and contributes towards maintaining government relations, as well as integrating GIS and Hyperloop in the many projects. Moreover, her world revolves around soccer!