Reduction of inequalities in both opportunities and outcomes for the improved social, economic, and the political inclusion of all has been identified as one of the United Nations’ main target goals in the promotion of global sustainable development (1). Among the most vulnerable are migrants and refugees who often face poorer health and socioeconomic conditions, making them more susceptible to crises in their host country (1). Immigrants and refugees often have to overcome negative attitudes and prejudice in their present country as they are sometimes seen as competing for resources and cultural dominance (2).

Canada has long been a preferred destination for immigrants and refugees due to the numerous favourable cultural, social, political, and economic milieu it offers. In 2019, Canada was the highest ranked nation in facilitating effective refugee resettlement (3); based on statistics on long-term socio-economic outcomes and cultural engagement. However, substantial disparities in income, employment, housing opportunities, access to health, and other socio-economic conditions still exist, particularly in the short term when refugees first arrive in Canada with limited social connections, resources, or knowledge of their new home environment. Unemployment rates for example are 3% higher for refugees than Canadian-born citizens, while the average income for first-year refugees is a low $20000, with middle-class incomes typically not achieved until at least the fifth year of residence (4). Refugees, particularly stay-at-home women, may also experience the exacerbated negative impacts of social and cultural isolation, which can worsen existing mental health and social issues such as depression, low self-esteem, and marginalization (5).

The goal of our app; Ekoalaty is to help reduce the different variegated inequalities faced by newly arrived refugees and migrants in Metro Vancouver by providing fundamental resources and information necessary to build a solid foundation in Canada, thereby closing the gaps in conditions and resources that exist between newcomers and Canadian-born citizens. Our app connects users to a network of facilities offering affordable access to educational materials, computers and internet, recreational opportunities and attractions, public transit stops, etc. Ekoalaty also seeks to improve the economic conditions of migrants by showing and directing the user to nearby employment offices and recent job postings in order to secure early employment opportunities. The app further supports users in identifying neighbourhoods with populations of similar or shared ethnicity, enabling users to find locations where they can feel a sense of community and also overcome significant language barriers. 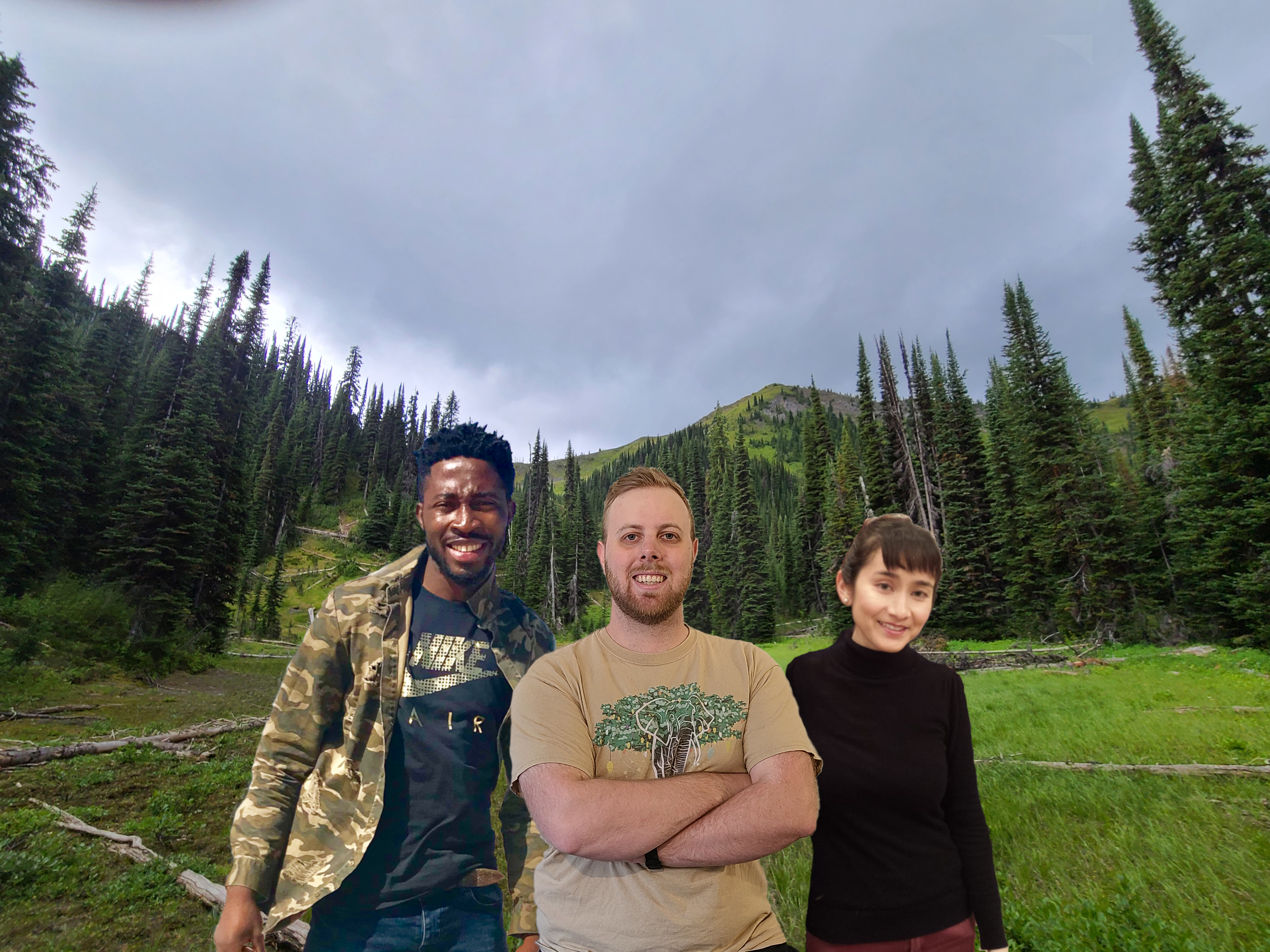 Bright Addae: Bright (left) is a second year PhD candidate at Simon Fraser University studying Geoinformation science. He received his Bachelors in Geography at the University of Ghana and Master of Science in Environmental management from the University of Kiel (Germany). Bright’s current doctoral research focuses on using new geospatial techniques such as spherical GIS to model urban land-use change. In his spare time, Bright enjoys drawing, cooking, watching sports and photography.

Alex Smith: Alex (center) is a PhD candidate at Simon Fraser University in the Department of Geography. He received his Bachelor of Environmental Studies and a Master of Science in Geography from the University of Waterloo in 2015 and 2017, respectively. His research focuses on agent-based modelling of complex geospatial systems and developing map comparison techniques, both in three spatial dimensions (3D) over time. As 3D data becomes more prolific, there will be an increased need for these techniques in order to fully evaluate and compare models and data. During his free time, Alex enjoys hiking, climbing, and playing ultimate frisbee.

Kendra Munn: Kendra (right) is a graduate student in her second year of pursuing a master's degree in Geographic Information Systems and Science at Simon Fraser University, where she previously graduated with a bachelor's in Environmental Science, Applied Biology and certificates in Spatial Information Systems and Co-operative Education. Her research interests lie in researching novel approaches to spatial analysis and modeling methods in 3D, particularly in analyzing the urban environment. She hopes to find a career working with geographic information systems to help find solutions to current environmentally focused or urban planning based issues.