The current paradigm of climate change mitigation has been heavily focused on eliminating the world’s dependence on fossil fuels and promoting cleaner air in major urban areas. The use of fossil fuels adds greenhouse gas emissions, exacerbating climate change processes. They also add several pollutants to the air, dirtying the air which can result in health complications for locals. In urban areas around the world, the use of gasoline-powered vehicles contributes significantly to these problems. Recognizing this, the City of Vancouver (BC) released the 2020 Greenest City Action Plan in 2012. The plan outlines 10 goals that the city will aim to reach by 2020 to become the ‘world’s greenest city’. Two of their goals (Goal 1 & 8) involve eliminating the city’s dependence on fossil fuels and to “breathe the cleanest air of any major city in the world.”

The goal of our application, goElectric, aims to support the City of Vancouver’s Electric Vehicle Ecosystem Strategy by showcasing to residents of Vancouver the benefits of making the switch to EVs. Our application will demonstrate how much Vancouverites can save in terms of fuel costs and how much carbon emissions they would prevent by switching to an EV. Our application not only allows users to observe charging stations locations, but to explore multiple EV models that are currently available in British Columbia with their typical travel routes with start and end markers. Our application will provide custom annual values based on the EV model they select and the customized route they provide. Our application can show where closest charging stations in Vancouver are with a user-specified proximity to the route previously specified. We also illustrate how far EVs can go on one charge or less to demystify misconceptions about EV travel ranges. 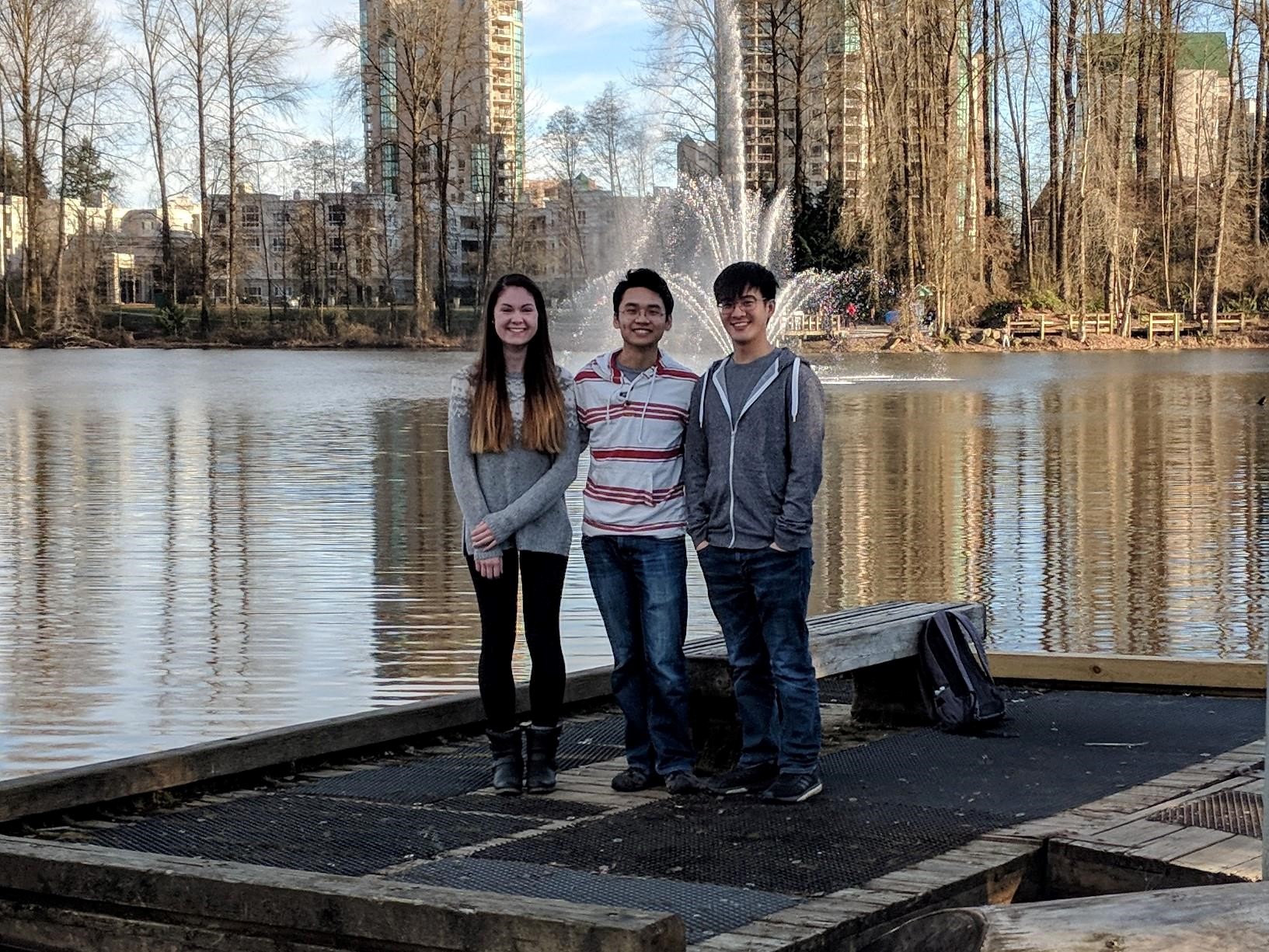 Alysha van Duynhoven: Alysha (left) is a fourth-year Computing Science student at Simon Fraser University. She is also pursuing a minor in Geography, a Certificate in Spatial Information Systems, and a Co-op Education Designation. She has had several previous internship positions which have provided her with diverse experiences in front-end and back-end software development. Alysha loves programming, GIScience, and technology. When away from her computer, she enjoys hiking, kayaking, stargazing, photography, playing soccer, and creating things.

Anthony Lee: Anthony (centre) is a fourth-year Geography student at Simon Fraser University. He is also working to obtaining a minor in Dialogue and certificates in Spatial Information Systems and in Environmental Literacy. He currently works as a GIS Technician for TransLink and was previously a research assistant for SFU’s Spatial Analysis & Modeling Lab. In his spare time, Anthony works as a lifeguard & swimming instructor for the City of Burnaby and loves to take his Boston Terrier out for walks.

Chris Yee: Chris (right) is fourth-year Geography student at Simon Fraser University. He has completed the Spatial Information Systems Certificate and the SFU Co-op Education Designation. Chris is currently a GIS Technician at the Fire Underwriters Survey and has previously worked with the Department of Fisheries and Oceans as a GIS Coordinator. Chris is also interested sustainable futures through innovations in technology and cultural paradigm shifts. Outside of academics and work, Chris spends his time snowboarding, mountain biking, and practicing photography.